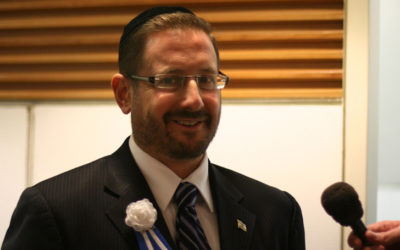 Rabbi Dov Lipman is a native of Silver Spring, Maryland, and the son of Ronald Lipman z”l, a federal administrative law judge. He attended the Yeshiva of Greater Washington in his hometown and completed his rabbinical studies at Yeshivas Ner Yisroel in Baltimore while in a concurrent program with the Johns Hopkins University, where he earned a master’s degree in education. Lipman received ordination from his Rosh Yeshiva, Rabbi Yaakov Weinberg.

After marriage, Lipman spent two years at the Kollel in Cincinnati. He immigrated to Israel in 2004. In the 1990s, Lipman was asked to serve as principal of Eshkol Academy, in suburban Washington, D.C. Subsequently, Lipman was offered a faculty position in Israel.

Since then, Lipman served as a faculty member at several institutions for post-high school Torah learning, such as Yeshivat Yesodei HaTorah, Yeshivat Reishit Yerushalayim, Machon Maayan, and Tiferet. He has authored several books on Jewish topics and lives in Beit Shemesh with his wife and four children. He became active in politics in response to local extremism and was asked to join the slate of candidates of the fledgling Yesh Atid Party for the 2013 election. After his entrance into the 19th Knesset, Lipman renounced his United States citizenship as required by Israeli law. He served as a member of the Knesset’s Finance Committee, House Committee, and Committee on Immigration and Diaspora Affairs.