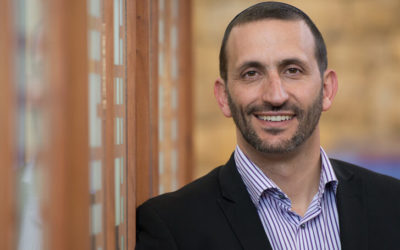 Rabbi Doron Perez is the Head of the World Mizrachi Movement. Rabbi Perez studied in some Israel’s leading Yeshivot culminating in Rabbinic and a B.Ed. degree, and served in the IDF in the Hesder Army Program. He served the South African Jewish community for 15 years in multiple leadership roles: as the Rabbi of the Mizrachi Movement, the Senior Rabbi of the Mizrachi Shul in Johannesburg, and the Head of the Yeshiva College schools. Rabbi Perez is a renowned orator and has been scholar-in-residence in many communities throughout South Africa and around the world. He is the author of the book “Leading the Way”, a collection of writings on some of Jewish life’s most important matters. Rabbi Perez returned to Israel with his wife Shelley and their children in the summer of 2014 to assume his position at World Mizrachi.

Mizrachi is the global Religious Zionist movement, spreading Torat Eretz Yisrael across the world and strengthening the bond between the international Jewish community and the State of Israel, as it is written: “For the Torah shall go forth from Zion, and the word of Hashem from Jerusalem.” Based in Jerusalem and with branches across the globe, Mizrachi – an acronym for merkaz ruchani (spiritual center) – was founded in 1902 by Rabbi Yitzchak Yaacov Reines, and is led today by Rabbi Doron Perez. Mizrachi inspires people with a sense of commitment to the Torah, the Jewish people and the Land of Israel.