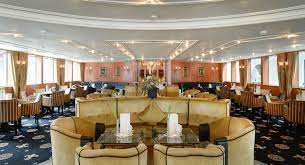 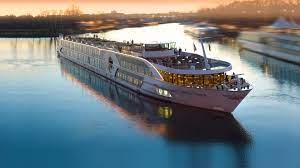 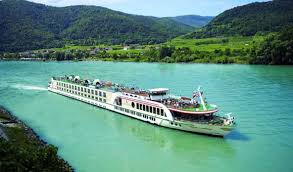 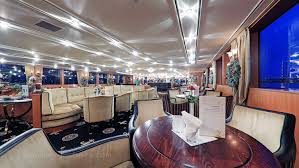 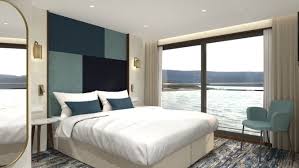 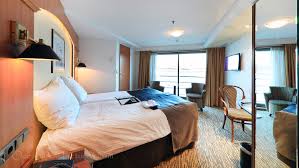 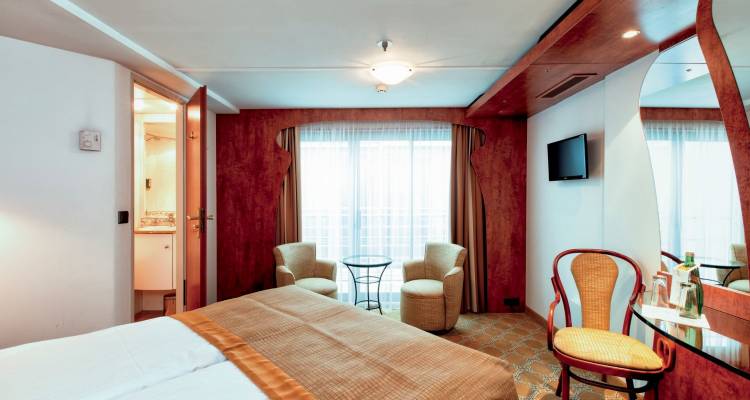 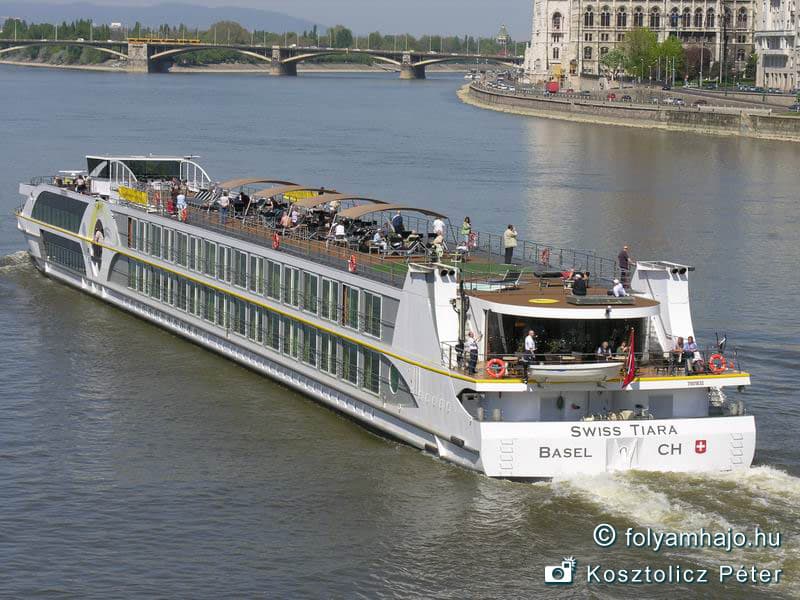 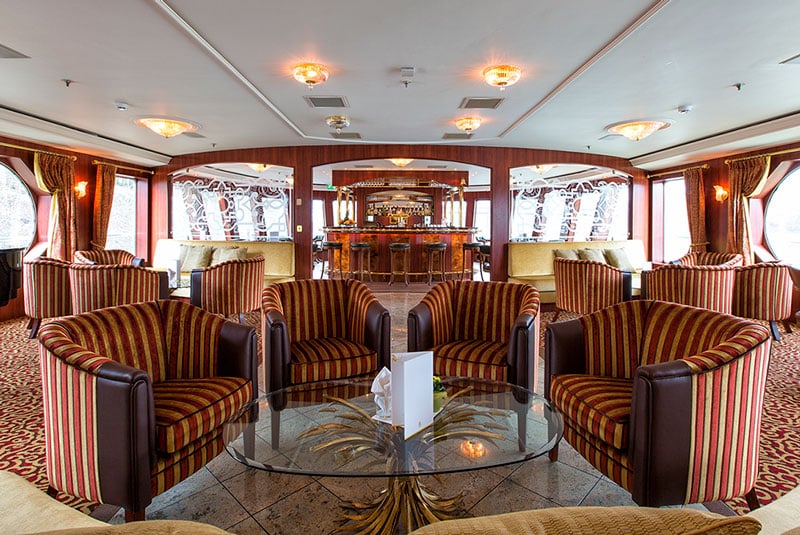 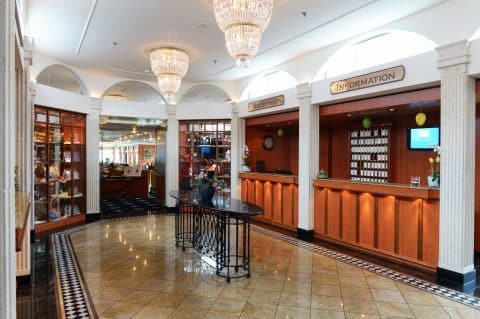 On the MS VIVA TIARA, freshly renovated in 2020, 76 exclusively furnished cabins for 152 guests ensure relaxing moments of well-being. The majority of the cabins on the Diamond, Ruby and Emerald Decks are 15 m² 2-bed cabins, from which you can enjoy the passing landscape via a French balcony on the Diamond and Ruby Decks. On the Ruby and Diamond Deck there are two additional 17 m² Junior Suites on each deck, which also have a French balcony. The cabins on the Emerald Deck have windows that cannot be opened. All cabins are perfectly equipped with flat screen TV, included minibar, Nespresso® machine, beauty products by RITUALS®, hairdryer, safe, air conditioning, shower and toilet. A lift connects the lobby with the Diamond Deck, Ruby Deck and the restaurant. On the MS VIVA TIARA, in addition to the main restaurant Riverside, guests can enjoy a bistro included in the VIVA All-Inclusive, as well as a wellness area with sauna and steam bath, among other things, and the sun deck with whirlpool and many sun loungers and other seating areas.

About our Kosher Cruises

Combined we are the world’s leading Kosher Tour operator with over 30 years experience, having satisfied thousands of Clients from USA, Israel, France, Belgium, Switzerland, UK , Mexico, Australia, South Africa on dozens of Cruises. We provide four gourmet meals a day in our own separate area of the dining room. All our meals are freshly prepared under the Management of  our Executive Chefs aboard each ship.

The Kashrut is Glatt Mehadrin under the strict Supervision of Rabbi Nechemia Rottenberg Raised in Jerusalem and educated at the Ponevezh Yeshiva in Bnei Brak. After his marriage, he studied at the Beit Midrash of Horaah at the “Kol Ya’akov” Yeshiva, as well as with the Rishon LeZion, Rabbi Mordechai Eliyahu, z”l He was ordained by the Chief Rabbinate of Israel. Rabbi Nehemiah Rotenberg came to Vienna to serve as Rabbi in the community in 2002. During his tenure as Rabbi, he was the head of the “Zehut” Beit Midrash, and during his work in the community he dealt extensively in matters of Kashrus as a representative of many Batai Din (בד”ץ) around the world. Before 2002, while living in Israel he has dealt with kashrus issues and ran a weekly radio program on kashrus. During the past decade Rabbi Rotenberg’s main specialty is turning hotels throughout Europe to be able to provide food of the highest Kashrus level for Pesach and the summer months. Kashrus of a hotel is a distinct job and requires much expertise in the field, familiarity with the industrial kitchens, the form of Kashering an industrial kitchen, and of course extensive knowledge of kosher food products in Europe. His Kashrut team are all hand picked and well versed with many years of experience. Rabbi Rothenberg has spent many years developing the community Kosher list in Vienna for hundreds of food products sold in large retail chains throughout the Europe. This knowledge is very important and gives hotel operators in Europe the ability to bring local products and not need to import from Israel or the USA. His Kashrut experience has further expanded into the Kosher Cruises and he the Rav Hamachshir for Kosher Travelers cruise packages. Rabbi Rotenberg works throughout the year to obtain Kosher meat and poultry throughout Europe at the highest kosher level, at the best price. For every shechita Rabbi Rotenberg sends a special overseer on his behalf in reservation to ensure that the shipment of meat from the start will arrive at the hotel with the utmost supervision.   Rabbi Rottenberg currently serves as part time Rabbi of Savion community in Israel # Further enquiries pls contact Rabbi Nechemia Rottenberg on +972 584038543 / +436889171489 or nr@zehut.org

Let us pamper you with our freshly prepared cuisine by renowned chefs, cooked from start to finish on board and entirely from fresh ingredients. From casual hot & cold buffets to elegant glatt kosher dining in our ocean view restaurant with choices sure to please those with even the most discerning tastes. Expect fine china, crisp linens, fine glassware and cutlery, and sheer elegance through which you will enjoy a glatt kosher dining experience at sea.To compliment the three delightful meals, there are also afternoon and late night snacks to tempt your palate. You will enjoy the Glatt kosher cuisine of uncompromising quality and strict kashrut standards. All meat is Glatt kosher and milk products are Chalav Yisrael. Our on-board Kosher kitchen is under the full time supervision of a team of mashgichim, headed by our cruise Rav HaMachshir.

Rabbi Baruch Taub: Scholar on board The Epic

Rabbi Baruch Taub is the founding Rav and Rabbi Emeritus of the Beth Avraham Yoseph Congregation of Toronto (BAYT). Rabbi Taub established The BAYT together with visionary philanthropist Joseph Tanenbaum z"l and 12 families in 1981. At the time of his retirement in 2010 the congregation had grown to become the largest congregations in North America.

In addition to the multiple Minyanim and classes/shiurim BAYT houses a Kollel of Torah scholars which has enhanced the level of learning throughout the community.

Before returning to his native Toronto Rabbi Taub served with distinction as the National Director of NCSY.

Rabbi Taub is a Yadin Yadin musmach Of The Ner Israel Rabbinical College, Baltimore Md. He was President of the Va'ad Harabonim of Toronto and awarded the National Rabbinic and Leadership Award Of the Union of Orthodox Jewish Congregations of America.

Rabbi Baruch Taub holds an M.A degree from Loyola College Baltimore/Maryland and a Doctorate in Judaic Studies from Maimonides College.

Rabbi Taub is the author of several books including: Gedola Hateshuva, Kanfei Yona and a two-volume exploration of the weekly sidra And the Dove Found Rest.

Rabbi Taub can be reached at: baruchtaub120@gmail.com

All cabins on the Ruby and Diamond decks have French balconies. The outward-facing staterooms are equipped with a radio, flat-screen TV, minibar, safe, air-conditioning, hair dryer, shower and WC.

The 153-passenger ship has a stylish lounge with dance floor and panoramic bar, as well as a comfortable bar in the rear, all situated on the Diamond deck. In ship's entrance hall, guest will find the reception, Travel Desk and boutique. The elegant restaurant is located on the Ruby deck. The wellness area is on the Emerald deck and features a whirlpool, steam bath, sauna and solarium. A lift connects all decks, except the Emerald deck.

Note: You can see the CruiseMapper's list of all river cruise ships and riverboats in the "itinerary" section of our River Cruises hub. All companies and their fleets are listed there. 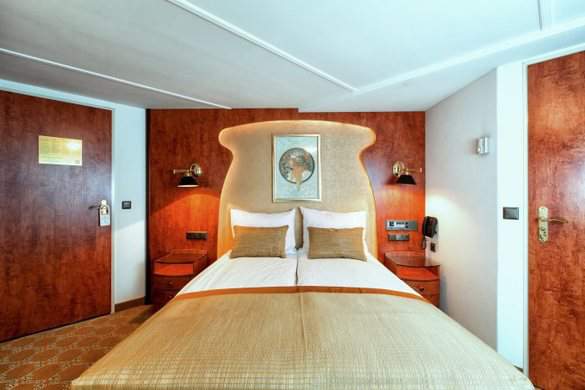 There is a $1000 per person deposit required to confirm your reservation. If the tour is canceled because a minimum number of participants was not reached, you will receive a FULL refund.