by Fluxcapacitor39 on Storify

Themed hotels have really taken off in recent years and aviation-themed hotels are no exception. The question remains, however, can you still join the "mile high club" if you're only 30-feet off the ground?

The Jumbo Hostel is located in an up-cycled Boeing 747 at the Arlanda International Airport near Stockholm, Sweden. Built in 1976, the Jumbo Hostel has 27 rooms and a total of 76 beds. The majority of the rooms are dorm-style, with shared showers and bathrooms. For an additional 200 dollars, however, guests can spend the night in the plane's cockpit, which has been converted into a luxury suite with a private bathroom and a panoramic view of the airport's runway. Dorm beds average between 50 and 60 dollars per night.

Though the inside of the plane has been fully refurbished to include private bedrooms, showers and a cafe restaurant, some of the original parts of the plane remain, including the lounge bar, oxygen masks and the original seats from first class. 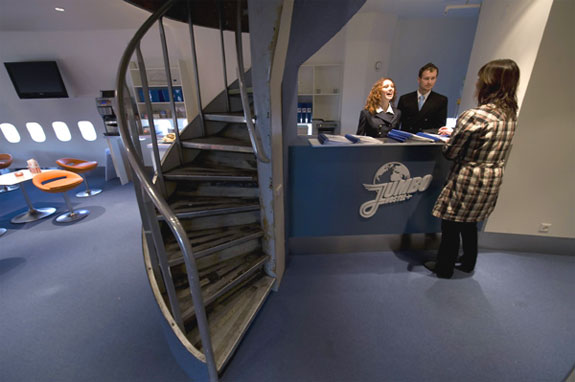 The Costa Verde hotel in Costa Rica has not one but two converted airplanes. The hotel's 1965 Boeing 727 plane was transformed into a two-suite lodge with a balcony on each wing and a bathroom and shower in the cockpit. Parked below is the second plane, a Fairchild C-123, which the hotel's owner remodeled into a bar inside the hotel's restaurant, "El Avian." Prices of rooms in this aviation-themed hotel is as high as the plane that towers above them: 250 to 500 dollars per night.

The Winvian is a 113-acre all-inclusive resort located in Morris, Connecticut. It features 18 cottages and one suite, each with its own unique theme. There's a library theme, for example, with floor-to-ceiling walls of rare, first-edition books as well as a golf, music and "beaver" theme. But most impressive by far is the helicopter cottage, which houses a 17,000 pound 1968 helicopter. The helicopter, which once flew for the Connecticut coast guard, now sits in the center of the barn-sized cottage and is outfitted with a bar, sofa and flat-screen TV.

An all-inclusive stay in the helicopter cottage costs $1,350 per night. By comparison, a ride in an actual opperating helicopter, like this flight to Grand Canyon from Las Vegas, costs under $300. 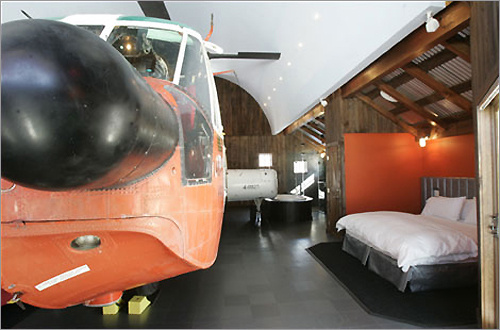 Helicopter in Your Room

Would you ever stay in an aviation-themed hotel?

Dreaming of the perfect kosher vacation? We’re here to make it a reality. Contact our dedicated team today.
CONTACT US

Let Kosher Travelers handle all of the details of your adventure, from ground transportation and luxury accommodations to delicious, freshly-prepared meals and a full planning of the itinerary and tours, so that you can spend every moment enjoying and zero time worrying.
LEARN MORE